this is the journal of dorian gray.

i've been able to roll with most of lj's punches, but this new endless-scrolling friends page thing is the last straw. who's got a good downloading client that will include comment threads? semagic? 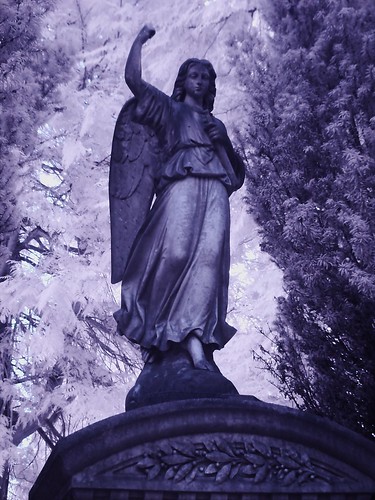 took some pix at the graveyard the other day.

"people should be able to touch one another and feel each others pain. physically, like you could place your hand on someone's cheek and feel their toothache; and emotionally, if you move someone, touch them deeply, you have to take responsibility for that depth of feeling and care about them.

it isn't just pain that we should feel in each other -- happiness should seep out of pores and clouds of jealousy and all the different kinds of love and disappointments should float around us. we could walk in and out of people's clouds and know what they're feeling. that'd be the kindest way to live."
~kristin hersh, rat girl

i have finally found a scotch i really like, and it's $100+/bottle. this is just a small obstacle, though. i will have a bottle of glenrothes '85 in my house before the year is out. i will!

i have 5 pairs of scissors, and i have a shitton of rubber bands, and i still can't get my hands all cool like this.

as much as i'm (i think) behind the occupy ____ movement, i've not participated. i've not gone to the camp, i've not donated water or toilet paper, i've only marginally kept an eye on news reports. a little moreso now that the encampments are getting broken up and pregnant women are getting pepper sprayed, but still... i have more questions than answers.

mostly, my reluctance lies in that i don't think that confrontational direct action works anymore; people like PETA and the unibomber have ruined it. maybe it never really worked at all. i mean, granted, it gets people talking, but then what? in modern times, are there direct lines that can be drawn between action and positive social change? i'm not asking about suffrage or the civil rights movement, those were protests with solid, stated goals, and they took place at times when a large impact had to be made. carrie nation couldn't get her message out via facebook, so she had to smash some shit up with a hatchet, but is that tactic still valid?

does the everyday nature of it all dilute or strengthen the message?

what exactly has occupy ___ changed? are we better-educated about certain issues? maybe. are we working on changing our lifestyles - above and beyond switching to credit unions? do we feel we have a greater say in our (supposedly representational) governmental procedures? i just don't know, and i don't know how to go about finding solid answers. do we even know what this whole ruckus is all about? are we sticking with antiquated protestation methods because we can't think of a better way to go about it?

a lot of my feelings are tainted by my "activist" parents, i totally admit that. i saw them do bad things with the best of intentions, and i saw them do dumb things because they thought it'd make a point.

one example: in 3rd grade, we had a couple of high school students from norway visit our class. we were supposed to prepare a few questions for them, fluffy stuff about daily life and culture and all. the expectation was that after school, we'd head to the library or ask our parents to help us read up a little bit about norway and we'd base our questions on that. when i asked my mom for help, she told me all about seal hunting and told me to ask the visiting students (who were expecting questions like "is it colder there than here?") why their country still participated in the seal slaughter.

so i did.
and everyone was shocked and horrified.
and i didn't get that i had done anything wrong; i'd just asked the question my mom told me to ask. i was 9, i didn't know any better.

when i got home, i told her what had happened, and she laughed it off, "oh you weren't really supposed to have asked that..." really? because that's what we had talked about all night, to the exclusion of anything else that i could have asked, and even though i really wanted to know if everyone skied to work like i saw on that one monty python episode, i didn't even feel empowered to ask that.

i don't have any solutions. but i do know that while protesters getting teargassed on the streets may change our conversations, it will probably not change the mind of the person who's caught in a traffic jam because of it.

i hate movember. i think that growing a mustache for charity is a shitty idea, but then i don't like charity events that call for any kind of dog-and-pony-show business. and i especially don't like listening to women complain about their menfolks' tempstaches. i wonder, if there was a charity thing wherein women were encouraged to grow and groom their pit hair, would it get as much dap? i highly doubt it.

my thanksgiving day alone plans have been wrecked.
however, it looks like i'll be flying solo on both christmas and new years, and for at least a week in january.

no, the muppets should not host the oscars.

and in further unpopular opinion, the whole "it gets better" movement is lame - it encourages passivity and acceptance rather than action. it's not a movement that strengthens the individual or even works towards making things - whatever those things may be - better; it's just patronizing.